Major structural elements of the Guyana-Suriname Basin include the Jurassic syn-rift grabens underlying the shelf, the folded and faulted Jurassic and early Cretaceous sediments that underlies the late Cretaceous and Tertiary deltaic monocline which was not subjected to a significant tectonic event. The third recognized structural element is the Demerara Plateau which demarks the eastern extent of the basin. The plateau is a remnant of older rocks from Gondwanaland predating its break-up into Africa and South America. Folded and faulted Jurassic and early Cretaceous rocks are overlain by a somewhat thinner, un-deformed section of late Cretaceous to Tertiary rocks.
A “slump” feature was also formed due to gravitational gliding onto early Cretaceous shales. Following the uplift, large volumes of early Cretaceous sediments were eroded to form a regionally extensive erosion surface, the Aptian-Albian unconformity.
The main architectural elements of the basin are illustrated in this regional composite seismic section, which stretches from the shelf to the Demerara Rise. Note the length of the profile as well as the time scale. 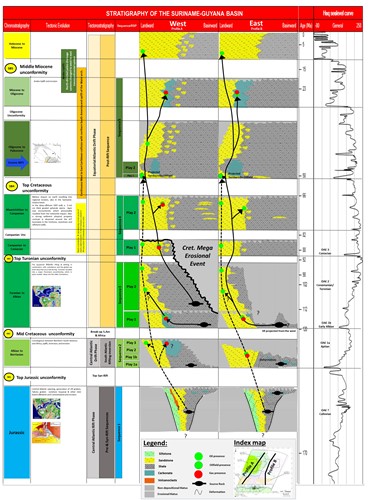 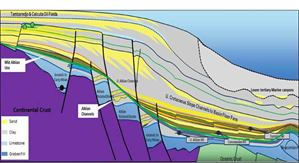 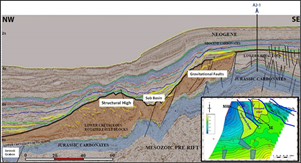