The presence of hydrocarbons within the basin was first proven by the discovery of >1 Billion barrels STOIIP in the Tambaredjo, Calcutta and Tambaredjo NW Fields onshore Suriname. A study by the USGS (2000) identified the Suriname-Guyana Basin as an under-explored basin with a potential recoverable exploration resource of 15 Billion, based on the petroleum system associated with the Late Cretaceous- Tertiary Basin. The recent discoveries within the deep basin in Guyana and Suriname has proven the occurrence of at least 8 Billion barrels of STOIIP (Exxon news release, 2020). The most significant source rock developed in the Suriname- Guyana Basin is within the Canje Formation that ranges Upper Albian to Santonian. These rocks have been encountered in several wells offshore Suriname and Guyana. This is a regionally recognized source rock interval with high TOC being time-equivalent to the prolific La Luna Formation of Venezuela and Naparima Hill in Trinidad.
Analysis of hydrocarbons encountered in Cretaceous and Tertiary sediments in the Onshore of Suriname have proved that there is at least a second source rock present where a late Jurassic to early Cretaceous age is provisionally proposed deposited in a proximal marine depositional system rich in terrestrial organic matter. There are also studies suggesting a strongly restricted lacustrine environment for this source rock. 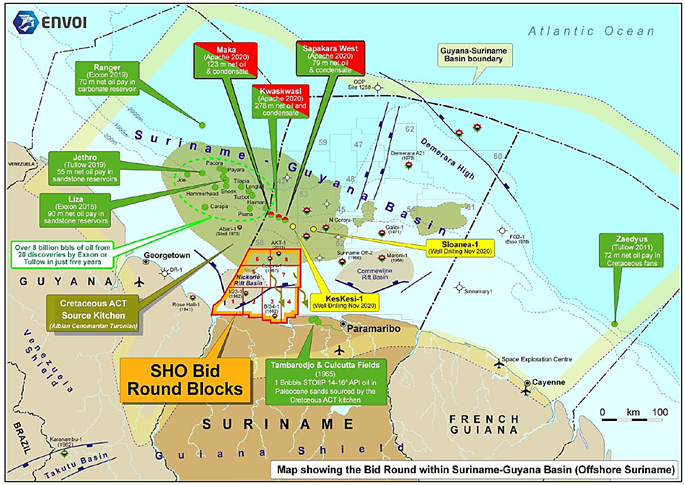