The petroleum basin history began in the Jurassic, by which time the North Atlantic rift system had progressed southward to the Central Atlantic region. The first rift graben, the Takutu graben onshore Guyana and Brazil, is interpreted as a failed arm of the early Jurassic North Atlantic rifting with clear linkage to the PJZ. (Crawford et. al, 1983). Initial horst-graben configuration offshore Suriname started in the early Jurassic and the hinge line (east-west fault zone) is noted to the north. This fault zone has been reactivated through geological time. 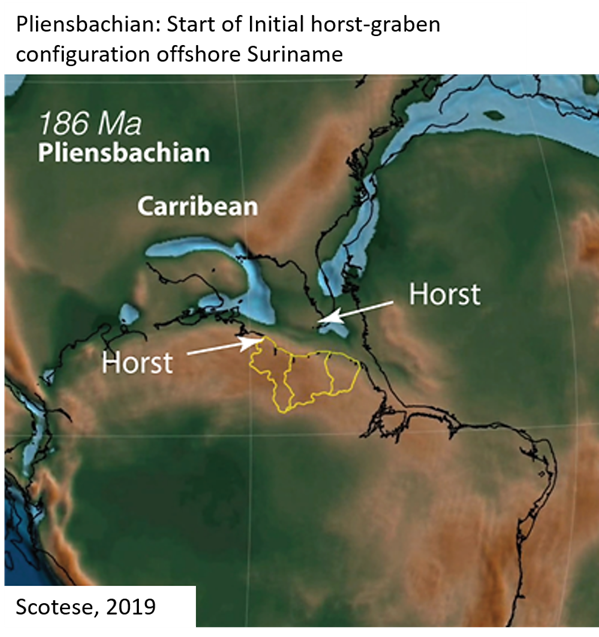 The mid Jurassic rifting occurred in a north-west direction between North America on one side and South America and Africa on the other. The late Jurassic continental extension was followed by seafloor spreading and a passive margin development.

During this kind of extension, grabens and half-grabens would most likely have formed on the continental plates (Einsele, 2000). The Nickerie and Commewijne Grabens on the Suriname shelf are likely to have been formed during this period.

During the Oxfordian, there is a deeper Basin development in the north with deposition of massive marine shales while North America was drifting away in north-west direction and oceanic spreading was actively occurring in the Central Atlantic according to Basile et al., 2013.
During the late Jurassic the break-up of North Atlantic becomes more evident. The late Jurassic to early Cretaceous gave a short-lived rise, a second tectonic event, of what will become the crust under the current Bahamas Bank, creating an intracontinental shallow sea offshore Suriname. Reuber et al., 2016 reports that this volcanism could be linked to a Bahamas hot spot at the initial opening of the Central Atlantic. SDR packages have been interpreted below the late Jurassic to early Cretaceous carbonate section of the Demerara rise, indicating that the early volcanism produced a marine substrate upon which the subsequent carbonate bank section developed.

The late Jurassic to early Cretaceous period also indicates a continues sea level rise, a period during which marine shales are deposited on top of the carbonate section.

During the Berriasian a new basin edge is developed to the north of Suriname where the western margins of Guinea Plateau and Demerara rise are shown as a continuous passive margin.

At the start of the passive margin phase in the early Cretaceous, North America drifts to the north-west, while the seal-level was rising, and marine shales were deposited up to the Barremian. Tectonic activation east of the Demerara rise started in the Hauterivian.