Offshore well A2-1, drilled on the Demerara Rise, penetrated Jurassic shelf sediments and confirmed the presence of non-graben related Jurassic source rocks in the basin. The depositional environment is interpreted as continental to shallow marine, within which lacustrine (or probably restricted) sediments rich in organic material were deposited. This source rock is interpreted as type I and has TOC of 1-2%. Seismic observations confirmed the presence of a shallow marine environment with clear reefs to be present in the vicinity of the A2-1 well, whereby these are capped by late Jurassic to early Cretaceous marine shales penetrated by the well. These depositional systems, carbonates and lagoonal restricted shales, have shown to contain effective source rocks in the Gulf of Mexico and in the Tarfaya Basin in Morocco.
Additionally, seismic data reveals the presence of Jurassic (half) grabens offshore Suriname. The main Nickerie and Commewijne graben on the shelf among other smaller ones more outboard can hold their own complete intra-grabenal petroleum system. These can be seen as similar to the Takutu Graben of onshore Guyana, interpreted as a failed arm of the early Jurassic North Atlantic rifting, which has a proven source rock and a unique Petroleum System within the graben. Therefore, it is possible that the oil found in the onshore and nearshore area could be generated by migrated from the undrilled postulated lacustrine source rocks within these Jurassic Grabens. 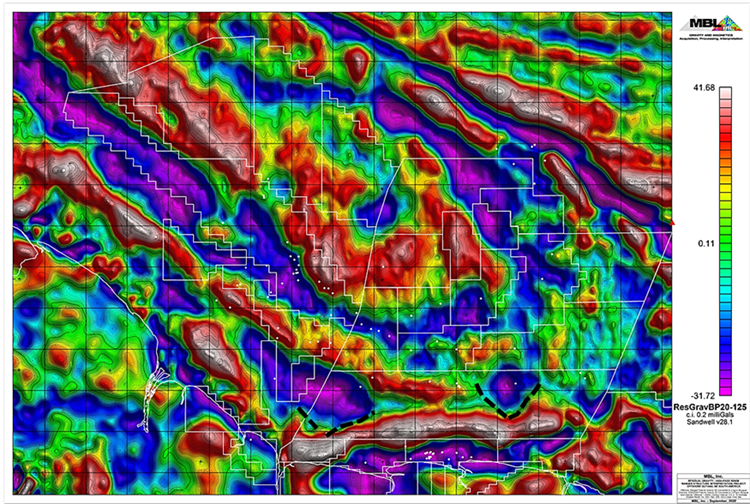 Gravity anomaly at grabens on the shelf, approximate southern boundaries indicated by black dotted lines; Nickerie graben in the west and Commewijne graben in the east
Source: Based on Sandwell, et al., 2014, v28.1.